Last Tuesday we drove my little orange boat onto a huge green ship, called Oberon, and waved goodbye as we left her there. Oberon sailed that evening, headed for LA via the Panama Canal. The next time I see my little boat will be when we meet her at the other end, ready to drive her up the coast to Monterey.  I can’t wait!

Shipping can be an expensive business, but I’m hugely lucky to be sending the boat courtesy of shipping company Wallenius Wilhelmsen Logistics. They are a great company to be working with, particularly as their vessels are eco-friendly and fuel efficient, and they are able to deliver quicker than all the other options we had looked into. Their remit is to “deliver innovative and sustainable global shipping and logistics solutions for manufacturers of cars, trucks, heavy equipment and specialized cargo.” Wallenius Wilhelmsen has been absolutely brilliant to me, and I look forward to seeing my boat safely delivered at the other end.

Thank you so much to everyone who came to this event at MShed on Wednesday 2nd April – it was brilliant to see so many familiar faces, as well as some new ones. We ran another in a series of capsize tests and held a fundraising auction. Some very generous sponsors, along with some very generous bidders! Items included a fully kitted out bicycle from Bike UK, First Class treatment from Bristol Airport, some pampering goodies from Lush, cases of wine from Naked Wines, Luxury Car Weekend Rental from AMT Vehicle Rental, some generous individual donations, and a fantastic painting by Dirk Larsen. We have also been donated a wonderful holiday in the Isles of Scilly by Tresco Island, which will be up for auction soon!

Huge thanks again to everyone who helped and supported – I really appreciate it. Thanks also to MShed and Business West who made it possible.

This weekend was boat boat boat!

On Saturday we headed down to see Justin at the SeaSabre workshop to get some of the final things fitted on the boat. Liferaft straps, Jetboil holder, new (longer) seat rails, and various other straps and attachments all went in. Only a couple more bits and pieces to go on in Monterey (plus a lot of food and kit), and she’ll be ready to go!

Sunday was a water day. Battling an unusually low tide near Padstow, we made it out with both boats and everyone still intact, though rather wet. I got some rowing training in while some super clever friends in the other boat managed to do some aerial filming of the boat using a GoPro attached to a hexacopter. Scroll right down to the bottom of the page for the video.

It’s really great to be starting to get a feel for the boat now – I can’t wait to get out there!

It was scarier than I thought it would be to be stuck hanging upside-down inside the cabin, with green water lapping at the hatches, creaks and groans coming from the boat, simply waiting for it to self-right again.

With BBC Points West looking on, we capsized the boat three times in Bristol Harbour with the help of Andy and his wonderful team of volunteers on MShed’s crane, as well as the Harbourmaster’s boat.

The first attempt was just to see what would happen if we capsized the empty, unballasted boat in flat water. She lay very comfortably upside-down, making no attempt to self-right.

Secondly, I got into the cabin and strapped into my harness to be capsized – again unballasted. The boat was more unstable, but still wouldn’t self-right, even after a good four minutes of struggling.

Third time lucky – we put 50kg of coal into the boat as ballast (the only thing we had to hand that was heavy enough), strapped me inside again, and capsized her. Almost immediately, she came round again.

Conclusion: ballast is very important if you don’t want to be trapped upside-down in your cabin in the middle of the Pacific!

BBC Points West coverage of the tests (with apologies to every other European crew at the end there!)

When I was speaking at the Winter School Games, I met Councillor Alan McMurray of North Somerset Council. He was really interested in my row, and invited me to speak at a Civic Lunch celebrating community sport in North Somerset. I was pretty chuffed to be speaking alongside an Olympian and a Great Britain gymnastics champion.

It was a lovely event – despite feeling exhausted from being out training with the boat the night before – and there were some great questions from the audience.

I had the boat with me, so we positioned it outside the hotel so that people could have a look at it afterwards. It made quite an impression!

What an honour to get to give a TEDx talk! This was a really exciting event, and particularly as it also fell on International Women’s Day (it was a busy day – Downside in the morning and TEDx in the afternoon).

I was hugely nervous before it. I think I’d built up the idea of ‘TED’ and how the talk needed to be in my head, after watching ‘classic’ polished TED talks. I fretted and worried in the lead up to it, but found I was able to relax into it on the day. I saw the variety of talks that people were giving, and realised that there is no ‘one’ way of giving a TEDx talk. Mine was just my version.

The title of my talk was ‘Why row 2,400 miles across the Pacific Ocean, alone?’ I’d decided to focus on that question that I get asked the most – why? – and this was a really fruitful way into attempting to convey why I am determined to do this slightly crazy thing.

Check out the video if you’d like to see what I said!

International Women’s Day falls on the 8th March every year, and has been observed in some form for over 100 years.

I was invited to speak at Downside School to mark International Women’s Day. I was in the distinguished company of author Maria Farrer and academic Dr Bruna Gushurst-Moore – who both gave really thought-provoking talks.

Yet again, the questions at the end of my talk were what really made it for me, and I was pleased to have a real range of thoughtful questions. 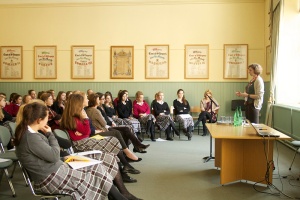 I also ran into an old friend from university who is now working at Downside, which was a lovely surprise in a very busy day!

The inaugural Oxford and Cambridge Explorer’s Evening was held in an upstairs room at St Hilda’s College, Oxford, overlooking the river. I was lucky enough to be the warm-up act for renowned Arctic explorer Pen Hadow – it was amazing to be invited to speak alongside him.

Listening to Pen speak, I was able to reflect on my preparations for the challenge, particularly the aspects that are relevant to the solo adventurer. I spent a good long while chatting to him about it afterwards, and came away with more ideas about how to prepare my mind for the challenge to come. Next step – booking a couple of sessions with a sports psychologist. 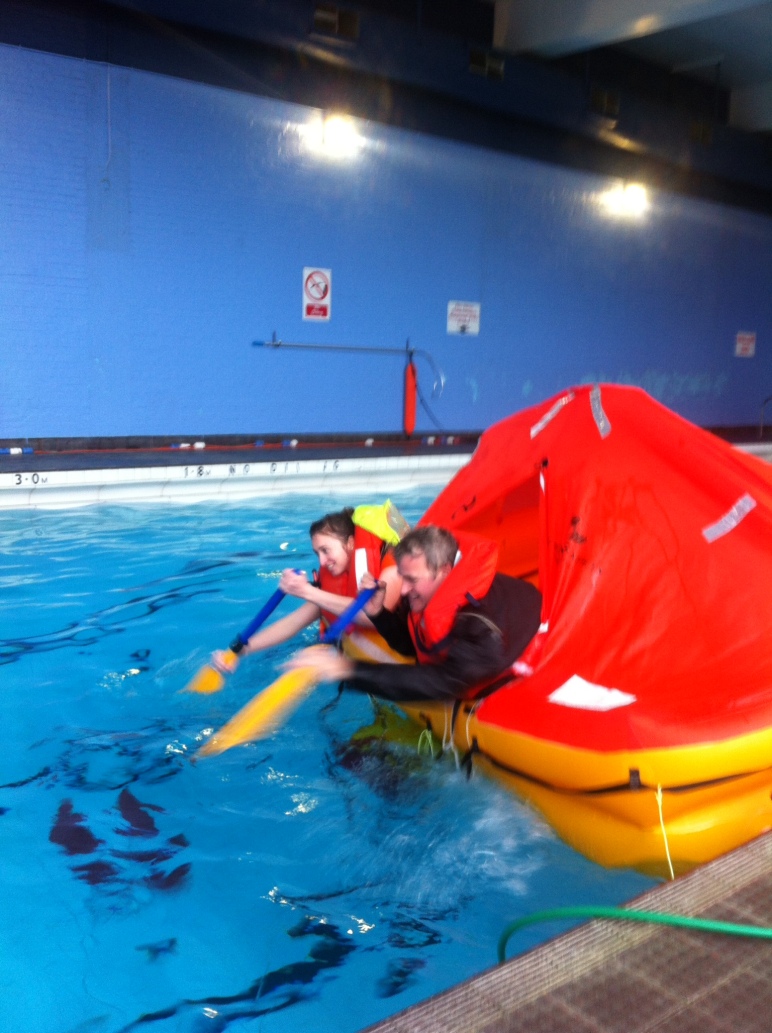 After completing my Sea Survival RYA course last Sunday, I’m now fully qualified for the ocean row. The timing couldn’t be better, as I’m picking up my boat this coming weekend, and also today hit the ‘100 days to go until race start’ marker.

Fewer people are inclined to spend the day learning how to survive in a small, wet life raft during the winter months, which means that we were a very small group in the Training Room of Greenwich Yacht Club on Sunday. The morning was theory based, and ranged from what to keep in an Emergency Grab Bag to why one might start to crave fish eyes (Vitamin C), while the afternoon was about getting into the pool and going over all the practical steps.  It was great for me, as I was able to ask lots of questions, and have a go at dealing with the life raft by myself.

Much of the focus of the morning was on how to avoid things going wrong in the first place, and how to be best prepared for anything that does go wrong. Although the afternoon that we spent in the pool was fun, I definitely want to avoid ending up in a life raft in the middle of the Pacific – they are pretty unstable and uncomfortable.  Hawaii is by far the preferred option!

Thank you so much to Nigel of Laminar Sails (Greenwich Yacht Club), who sponsored me through this course, and who was a dynamic, patient and downright excellent course tutor! 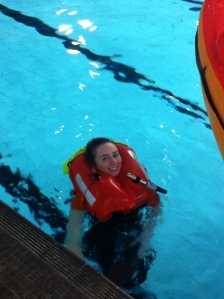 On Wednesday 12th February I spent a brilliant afternoon at Churchill Academy. I spoke at the Year 12 assembly about the challenge, and fielded some really interesting and thoughtful questions.

My visit made it into the school newsletter, and I look forward to staying in touch with them and hopefully visiting again. 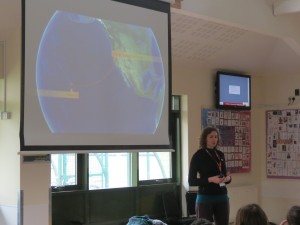 Big thank you to everyone at Churchill Academy!